Listen to the Music

I’ve sort of been collecting — that is, I note mentally and forget to write down — instances of One Little Word having a colossal impact. Perhaps, by way of illustration, you’ll recall the ruckus that ensued when Washington, D.C., official David Howard used the word niggardly in a meeting:

WASHINGTON CNN (February 4, 1999) A white aide to Washington Mayor Anthony Williams who resigned [under duress] after using the word niggardly in a conversation will be returning to city government, ending a flap over what critics derided as political correctness run amok.

On Thursday, saying he acted too hastily in accepting David Howard’s resignation, Williams offered Howard his job back as director of the Office of the Public Advocate. Howard agreed to come back to city government, but he has asked the mayor to find him a different job.

In fairness to those who objected to the word, its use was probably ill-advised. Niggardly is hardly ubiquitous (another word not universally understood) in text or conversation. Anyone with common sense might have predicted the brouhaha.

My tale is very different (its impact hingeing on a single letter, in fact), having to do with the fluidity of English-language vocabulary, which readily accepts ethnic and street slang (‘ho’, yo’ mama, homie [homeboy], the ‘hood, blunts [for marijuana], reefer) and technojargon (encryption, teleconference, CPU, whiteboarding, to name just a few).

Drug-subculture terms were conspicuous in the lyrics of rock music in the late 1960s and early 1970s, “acid rock” and “heavy metal” in particular. Sometimes the references were subtle, as in the Beatles’ (1967) “Lucy in the Sky with Diamonds” and “Strawberry Fields Forever.” There was nothing subtle about “Cocaine,” written and recorded by JJ Cale in 1976 and memorably covered a few years later by Eric Clapton, who claims “Cocaine” is “an anti-drug-song. The fans only listen to the refrain: ‘She don’t lie, she don’t lie, she don’t lie, cocaine.’ But it says, ‘If you wanna get down, down on the ground, cocaine.’” (Stern magazine, 1998.) 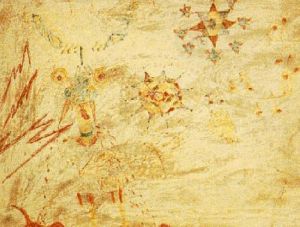 Young child Julian Lennon’s drawing, upon which John Lennon claimed “Lucy in the Sky with Diamonds” was based

John Lennon insisted, by the way, that “Lucy in the Sky with Diamonds” was based on a picture his son, Julian, had drawn and that no allusion to LSD was intended.

I had long been in the habit of tuning out lyrics. For one thing, they were often indifferently articulated. I’m one of the many who thought that CCR was singing, “There’s a bathroom on the right” in the group’s 1969 hit “Bad Moon Rising” (actual lyrics: “There’s a bad moon on the rise”). Do check out kissthisguy.com, the utterly hilarious “archive of misheard lyrics.”

A more compelling reason for not listening to lyrics was that they were so often just stupid, especially compared to the music and the musician.

My favorite male musicians tended to be lyric-impaired. You have to go back to Ira Gershwin to find any substance in masculine lyrics, or perhaps I am simply out of touch. I read In Watermelon Sugar all the way through, and the only thing I remember is that everything was an odd color, so it might be that I lack the refined sensibilities to perceive subtlety and nuance in songs such as… 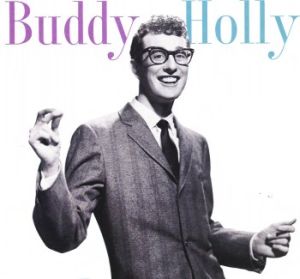 I’ll be honest: “La Bamba” is my all-time favorite song — the Ritchie Valens version, not the Los Lobos version or the Yum!Yum!ORANGE version. The lyrics have never been a factor, because they are in Spanish and thus, by definition, exotic.

But Ritchie Valens can take neither the credit nor the blame for the “La Bamba” lyrics, it turns out, because “La Bamba” is a three-hundred-year-old Mexican folk song. I wanted to know what a Bamba was, but apparently there’s no equivalent in English. The closest Spanish word to Bamba is bambú (“bamboo”), which, if you substituted it for Bamba, would make the song, if anything, less silly. Basically, Valens is singing about a dance, the Bamba, which either is a funny dance or is not to be attempted unless you, yourself, are a humorous, practical-joker type, plus you have to have speed and height, which [antecedent unclear] “I’ll be [be what? Speedy? High?] for you. I’m not a sailor. I’m not a sailor. I’m captain. I’m captain. Damn your eyes, I’m captain.”

If you are expecting a rebuttal here — “No, I’m captain” — you will be disappointed. The other shoe, in “La Bamba,” never drops. Wikipedia claims that the song’s message has to do with a groom’s promise to be faithful to his bride, fidelity being (according to Wikipedia) a virtue practiced by captains but not sailors, which shows how much Wikipedia knows about the privileges of rank.

In the fall of 1971, I started working as a bookkeeper at an MOR radio station. MOR (middle of the road) describes the station’s “format,” which was soft rock: the mainstream music of Bread (“Baby, I’m-A Want You”), Cat Stevens (“PeaceTrain”), Elton John (“Rocket Man”), Harry Nilsson (“Without You”), the Spinners (“One of a Kind [Love Affair]”), Dobie Gray (the truly lovely “Drift Away”), and so forth. Drug-free and hamless to children and puppies.

In those days I could and did listen to the radio while I worked, so I knew every song on the station’s playlist by heart. Sometimes I sang along, making up lyrics when the real ones were just a mumble. I didn’t mind being clueless about who “Daniel” was in the Elton John hit… “You’re a star in the face of the sky…,” and “It looks like Daniel; must be the stars in my eyes.” I guessed that Daniel was probably in Heaven, but it turns out he was going only as far as Spain. Fine with me.

And then my very favorite song, the one that made me feel Up when I was Down or relaxed when I was tense, disappeared from the playlist. The artists, Brewer and Shipley, were fairly obscure, though the song I adored was on their third album, Tarkio. I couldn’t imagine why such a sweet, innocuous, folk-y song would be found objectionable. After all, Lawrence Welk considered it “a modern spiritual,” and it was performed on his weekly white-bread TV program by Gail Farrell and Dick Dale, who were apparently laboring under the same misapprehension I was.

I asked one of the deejays about the song’s disappearance. “What happened,” I said with complete ingenuousness, “to ‘One Toe Over the Line’?”

Then I waited patiently while he picked himself up off the floor and controlled a tedious series of fits of the giggles. Whatever it was, it was gonna be good.

“It’s a hit,” giggle, choke, “off a joint—a marijuana cigarette.”

“I know what a ‘joint’ is,” I said irritably. But my annoyance was directed at Brewer and Shipley, for taking me in. No wonder they were “showing off [their]… smile” there at “the railway station.” They were stoned.

The divorced mom of a sweet 4-year-old girl, I was terrified of drugs. I would mellow some in the months to come. It soon became apparent that if I were to cross every occasional toker off my friend list, I’d be down to Mom and Dad and one or two insufferable Republicans I knew from high school, when they were regular people. Not every Republican is insufferable, but these guys were stiffs in suits, believe me.

So I reconciled with Brewer and Shipley, who had surely missed me,  and “One Toke Over the Line” remains a favorite, even though Spiro Agnew called it “subversive.” Below are links to the videos, performed by the original artists and also by Gail and Dick, who I’m sure have long since recognized the enormity of their mistake. You’ll also find the B & S version on the Feelgood Music page of my website. Don’t look for “Cocaine.” I’m saving it for my Bad-Trip, Downer, FeelShitty Music page, for those who find this happiness thing to be so been-there-done-that….