A podium is something you stand on

THE ENGLISH LANGUAGE NEVER STOPS EVOLVING. Since I’ve learned to accept change as an inevitable and even beautiful quality of our language, I’ve become more flexible, less rigid, and more adventurous about choosing and arranging words on a page. Right. When pigs fly and hell freezes over. I hate change. If it were up to me, the Dodgers would still be in Brooklyn.

Change is sometimes necessary, even beneficial. I get that. Pantyhose had to go. Lard in the cupboard, lead in the gasoline… I don’t miss them. But the English language is, for the most part, nontoxic and fat-free, so let’s not mess with it more than we have to.

There must be a better way to write respectfully than this:

Someone’s at the door. I wonder what they want.

Someone’s at the door. I wonder what he or she wants.

The latter is “correct,” but neither is going to win a prize for dialogue. No one talks like that, just as no one answers the question “Who’s there?” by saying—correctly—“It is I.” We can be forgiven for colloquial speech that breaks the rules… until it descends into grunts and snarls. I’ve been embarrased by my own mumbles lately during the half-block stroll to the grocery store. I usually pass other pedestrians, and one of us says something on the order of

Understanding that this isn’t a request for an organ-by-organ medical status report, I used to answer…

I’m doing well, thanks. How are you?

…but lately what comes out of my mouth sounds more like this:

and we sometimes take short cuts. Over time, our sloppy speech becomes formalized in the language. What’s a contraction, after all, except sanctioned laziness? It’s easier to say “didn’t” than “did not,” and even easier to say “di’n’t,” dropping that second pesky plosive altogether.

This is nothing new. The word lord, for example, comes from the Old English hlāfweard with a meaning similar to “breadwinner.” I learned this from Kevin Stroud on his excellent History of English Podcast (mandatory listening for anyone who’s interested in English-language and British history). Kevin explains how our language evolves to reflect the way we actually speak. A word’s journey from its earliest appearance—quite possibly among the ancient Indo-European people long before there was an alphabet—to its current spelling, pronunciation, and usage, can be a fascinating tale. When you know the word’s story, you don’t like to see it misused. 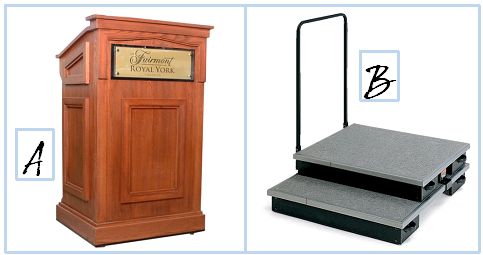 Illustrations from “What Is a Lectern or a Podium?” Message Masters Toastmasters

Consider, for example, the beleaguered podium. If ever a word deserved mercy, surely podium is that word. It’s expected to do not only its own job—that is, to be the word associated with a low platform of the type shown in Fig. B (above right)—but also the job of another word, which was assigned hundreds of years ago to objects such as that shown in Fig. A (above left); and that word is lectern.

As a rule, using the wrong word interferes with communication, but that’s not the case here. If I ask, say, the Scratchnsniff triplets to come on stage by summoning them “to the podium,” and there is no podium—only a lectern like the one shown in Fig. A— the siblings will cope. They won’t get lost or wander around looking for the podium that wasn’t where it was supposed to be. Why? Like 58.17 percent of the English-speaking population, they think that podium and lectern are synonymous.

I stand by podium for a different reason—its etymology. Podium is related to the Greek word pous “foot.” Octopus has the same root. Did you know that the plural of octopus is octopodes (if you are Greek)? Pous evolved from the Proto-Indo-European root ped– “foot” c. 2000-4000 BCE.

Thus, podium has something like five or six thousand years of history to its credit, as summarized below:

The Life & Times of Podium

What, precisely, do a podium and a foot have in common? I guess I had assumed, without giving it much thought, that the podium got its name because people stand on it. You know, with their feet. No; that’s not it at all—though it can be a useful memory trick. The “foot” in this equation isn’t a human foot but an architectural or artistic one, as illustrated in the photo labeled “foot of a vase” below. As the Romans apparently saw it, a podium was analogous to the foot of a vase (Greek podion).

Got an extra podium? Maybe you should take out an ad: Podiums for sale. You could use podia instead, but trust me, people will smirk when your back is turned. Me, I’m a Nebraska girl. I don’t say celli or concerti or podia or gymnasia, I don’t eat raw fish, and I buy my jewelry on eBay.

Where do you stand?

Unlike podium, the word lectern—which originally meant a reading desk in a medieval church—came into Middle English “through channels,” you might say, if you don’t mind perpetrating a vicious pun that relies on a clumsy reference to the English Channel , which separates France and England. In any case, lectern came through Old French letrun, from medieval Latin lectrum, from legere “to read.”

Now, if you can remember that we read at a lectern and stand on a podium, my work here is done.

I was a fan of Allison Janney in the role of C. J. Cregg on NBC television’s The West Wing. She was spectacular, and I’m sure she didn’t mean to stomp on my heart every time she spoke of the “podium” in the White House press-briefing room, night after night, week after week, for seven agonizing years. As White House press secretary, C. J. spent a great deal of time at, behind, beside, or otherwise in the aura of the miscalled “podium.”

During 155 episodes in seven seasons, certainly hundreds of people, if not thousands, had to have noticed the solecism: There’s a lectern on your television screen for all the world to see, and a star of the show is calling it a podium. No doubt many viewers contacted the show. But the lectern remained a “podium” throughout the program’s run, and that means one of two things:
(a) Nobody in the real White House ever referred to the thing as a lectern, or
(b) lectern is yesterday’s soggy Rice Krispies. It’s been written out of The West Wing and drop-kicked out of our lives. If it were a lame horse it would be taken out and shot, and We the Righteous are going to have to suck it up… unless…

Hey! You guys wouldn’t want to join me in putting our collective foot down and making a stand for standing on (not at  or behind) a podium, would you? Because if you would, send me an email (mary@annagrammatica.com) for a list of public officials and prominent educators to contact, starting with the Secretary-General of the United Nations. The man conducts his entire life behind a lectern.

A plethora of lecterns

Okay, maybe it’s not a global hot button, but the podium | lectern controversy isn’t just about little me with a bug in my brassiere. The experts and scholars are unanimous in their assent: A lectern isn’t a podium and it’s not okay to call it one. Here’s a heartening comment from a Toastmaster, followed by another from an authority on public speaking:

Many people confuse the words lectern, podium, rostrum, and dais. A lectern is the slant-topped high desk that you as the speaker stand behind and use when reading your presentation notes. It can be placed in the middle of the stage or off to one side. To remember lectern, think lecture.

A podium is a raised platform on which a speaker stands during a presentation. To remember podium think podiatrist – which is a foot doctor. You will want to use a podium, especially if you are short or there are more than three rows of chairs, to ensure everyone in the back of the room can see you. Standing on a platform will also dramatically increase your vocal projection. A rostrum or dais is a larger platform or stage on which a head table might be placed during a formal dinner.

More voices for the good and the true

…and here’s the megasite for all things presentation-related: 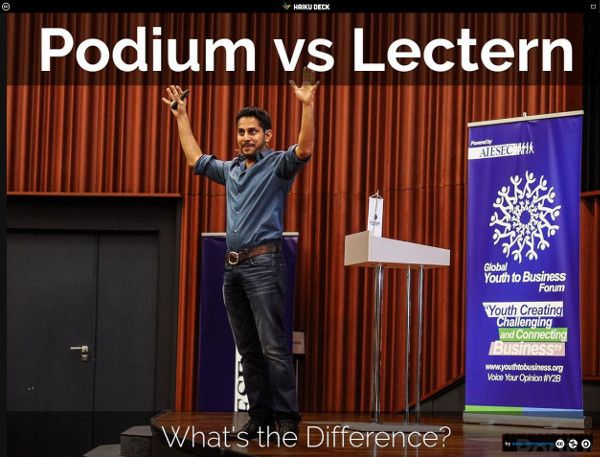 Does it really matter?

From the Daily Chronicle story cited above…

Just before a speaking engagement at a hotel several years ago, Mose asked a hotel staff member for a lectern, describing its intended use: to hold notes for the presentation. “You mean a podium?” the young man asked. “No, a lectern,” Mose insisted, though he should have known better. The man came back a few minutes later with a lectern, which he continued to refer to as a “podium.”

I won’t give up, but I’m not optimistic. When the White House falls, can the entire free world be far behind? Maybe I’ll reach out to the Lectern people, see if they’re interested in a combination fundraiser | podium/lectern-awareness event: Pennies for Podiums… in the U. K., maybe Pounds for Podiums and, um, Lbs. for Lecterns? Meanwhile, if you’re looking for me, I shouldn’t be hard to spot; I’ll be (sigh) the Last Man Standing.