How to Write Poetry and Live Poetically

Join now! Find details about this free E-course at Lesson 1 …

Robert Burns, from a 1787 portrait by Alexander Nasmyth

As I write, it is the day after the 250th anniversary of the birth of Robert Burns, one of the best-loved poets in English literature. I have a particular affection for “Rabbie Burns,” also known as “Scotland’s favourite son,” “the Ploughman Poet,” “the Bard of Ayrshire ,” and, in Scotland, simply as “the Bard.”

How could I not? The woman who may have been the love of his life, the woman for whom he wrote some of his most poignant poems and to whom he might have been married — at least briefly, for she died tragically in 1786 at the age of 23 — was named Mary Campbell. She was not his first love, however, and he had fathered several illegitimate children before he fell under the spell of his Highland Mary.

In the spring of 1786, Burns wrote a song, ‘The Highland Lassie, O’…. Burns wrote: ‘This was a composition of mine in very early life, before I was known at all in the world. My Highland lassie was a warm-hearted charming young creature as ever blessed a man with generous love. After a pretty long tract of the most ardent reciprocal attachment we met by appointment, on the second Sunday of May, in a sequestered spot by the Banks of Ayr, where we spent the day in taking farewell, before she should embark for the West Highlands to arrange matters among her friends for our projected change of life. At the close of Autumn following she crossed the sea to meet me at Greenock, where she had scarce landed when she was seized with a malignant fever, which hurried my dear girl to the grave in a few days, before I could even hear of her illness.’ Another song, apparently inspired by Mary Campbell, begins:

Burns Cottage, now a museum, where the poet lived his first seven years

“The golden hours on angel wings
Flew o’er me and my dearie;
For dear to me as light and life
Was my sweet Highland Mary.”

Maybe she, of all his lassies, was the love of his life. And was she his ‘only luve’ in his most famous love song of all, ‘A Red Red Rose’, written in 1794? It is certainly written to someone from whom he is parted – and whom he hopes to meet again one day, however great the separation. —“Should Auld Acquaintance Be Forgot”

Robert Burns (1759-1796) was raised in poverty, the oldest son of a tenant farmer, but his father was a self-educated man who taught Robert and his brother Gilbert and sent them to masters and tutors when he could.

To his father’s disapproval, Robert joined a country dancing school in 1779 and, with Gilbert, formed the Tarbolton Bachelor’s Club the following year. In 1780 Burns became a Freemason at Lodge St David, Tarbolton. His earliest existing letters date from this time, when he began making romantic overtures to Alison Begbie (b. 1762). In spite of four songs written for her and a suggestion that he was willing to marry her, she rejected him. —Wikipedia

His poetry, when first published, was well received, and he began to move up through the ranks of society. In Edinburgh, he met Walter Scott, who later wrote of him,

His person was strong and robust; his manners rustic, not clownish, a sort of dignified plainness and simplicity which received part of its effect perhaps from knowledge of his extraordinary talents. His features are presented in Mr Nasmyth’s picture but to me it conveys the idea that they are diminished, as if seen in perspective. I think his countenance was more massive than it looks in any of the portraits … there was a strong expression of shrewdness in all his lineaments; the eye alone, I think, indicated the poetical character and temperament. It was large, and of a dark cast, and literally glowed when he spoke with feeling or interest. I never saw such another eye in a human head, though I have seen the most distinguished men of my time.

Burns died of a blood infection in Dumfries at the age of 37.

The funeral took place on 25 July 1796, the day his son Maxwell was born. A memorial edition of his poems was published to raise money for his wife and children, and within a short time of his death, money started pouring in from all over Scotland to support them. —Wikipedia, accessed January 26, 2009 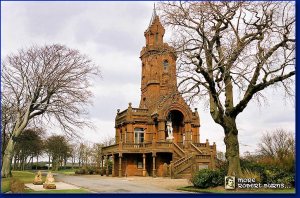 The Burns Monument in Kilmarnock, destroyed by arson in 2004

As fair art thou, my bonnie lass,
So deep in luve am I;
And I will luve thee still, my dear,
Till a’ the seas gang dry:

Till a’ the seas gang dry, my dear,
And the rocks melt wi’ the sun;
I will luve thee still, my dear,
While the sands o’ life shall run.

And surely ye’ll be your pint-stowp,
And surely I’ll be mine!
And we’ll tak a cup o’ kindness yet,
For auld lang syne.* Scots dialect translates to “Old Long Since” or “Old Long Ago”

We twa hae run about the braes,
And pu’d the gowans fine;
But we’ve wandered mony a weary fit
Sin’ auld lang syne.

We twa hae paidled i’ the burn,
Frae morning sun till dine;
But seas between us braid hae roared
Sin’ auld lang syne.

And there’s a hand, my trusty fiere,
And gie’s a hand o’ thine!
And we’ll tak a right guid-willie waught
For auld lang syne.

Gin a body meet a body
Coming thro’ the rye,
Gin a body kiss a body—
Need a body cry?

Gin a body meet a body
Coming thro’ the glen,
Gin a body kiss a body—
Need the warld ken? 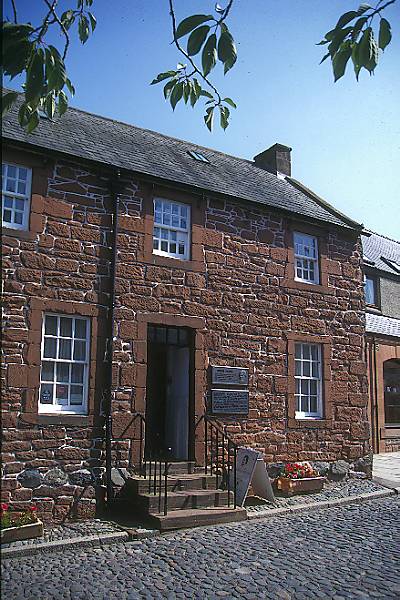 Robert Burns died in this house in 1796

I doubt na, whiles, but thou may thieve;
What then? poor beastie, thou maun live!
A daimen-icker in a thrave
‘S a sma’ request:
I’ll get a blessin’ wi’ the lave,
And never miss’t!

Thy wee bit housie, too, in ruin!
Its silly wa’s the win’s are strewin’:
And naething, now, to big a new ane,
O’ foggage green!
An’ bleak December’s winds ensuin’
Baith snell an’ keen!

Thou saw the fields laid bare and waste
An’ weary winter comin’ fast,
An’ cozie here, beneath the blast,
Thou thought to dwell,
Till, crash! the cruel coulter past
Out thro’ thy cell.

That wee bit heap o’ leaves an’ stibble
Has cost thee mony a weary nibble!
Now thou’s turned out, for a’ thy trouble,
But house or hald,
To thole the winter’s sleety dribble
An’ cranreuch cauld!

But, Mousie, thou art no thy lane
In proving foresight may be vain:
The best laid schemes o’ mice an’ men
Gang aft a-gley,
An’ lea’e us nought but grief an’ pain,
For promised joy.

Still thou art blest, compared wi’ me!
The present only toucheth thee:
But, oh! I backward cast my e’e
On prospects drear!
An’ forward, tho’ I canna see,
I guess an’ fear! 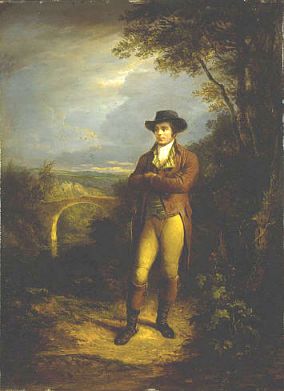 Another Nasmyth portrait of Burns, painted some 30 years after the poet's death

IS THERE FOR HONEST POVERTY

Is there for honest Poverty
That hings his head, an’ a’ that;
The coward slave-we pass him by,
We dare be poor for a’ that!
For a’ that, an’ a’ that,
Our toils obscure an’ a’ that,
The rank is but the guinea’s stamp,
The Man’s the gowd for a’ that.

What though on hamely fare we dine,
Wear hoddin grey, an’ a that;
Gie fools their silks, and knaves their wine;
A Man’s a Man for a’ that:
For a’ that, and a’ that,
Their tinsel show, an’ a’ that;
The honest man, tho’ e’er sae poor,
Is king o’ men for a’ that.

A prince can mak a belted knight,
A marquis, duke, an’ a’ that;
But an honest man’s aboon his might,
Gude faith, he maunna fa’ that!
For a’ that, an’ a’ that,
Their dignities an’ a’ that;
The pith o’ sense, an’ pride o’ worth,
Are higher rank than a’ that. 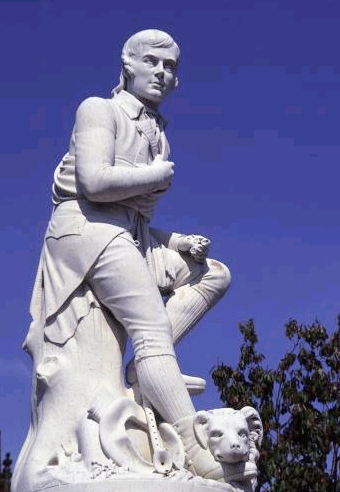